When it comes to N’awlins, everybody’s got a shtick. There was the Doberman lying on a blanket in the middle of Bourbon Street—paws straight up in his best rigor mortis pose. The poor creature was wearing some cheap knockoff shades from Walgreens and a kitschy t-shirt, pretending to be dead or drunk, or maybe dead drunk, I’m not quite sure. People gawked like they were looking at an overturned eighteen-wheeler. “That’s just wrong,” exclaimed one tourist as he leaned down with a grin to throw a crinkled dollar bill into the tip jar. On the street, dogs were the biggest hustlers. 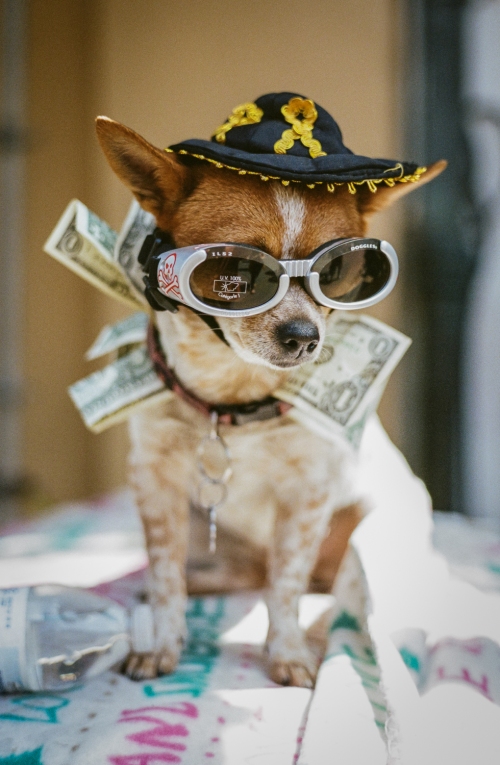 Further down Bourbon were the homeless hippies. What probably started out as a pot-fueled road trip epiphany at 3 a.m. somehow took a wrong turn along the way. Looking like they just tripped for a month straight in the hot California desert, these grungy souls with their dusty backpacks and off-tune guitars mostly kept to themselves, aside from a few attempts to channel their inner Jim Morrison. Clearly, the mirage of a better life in “The Big Easy” was too strong for them to ignore. 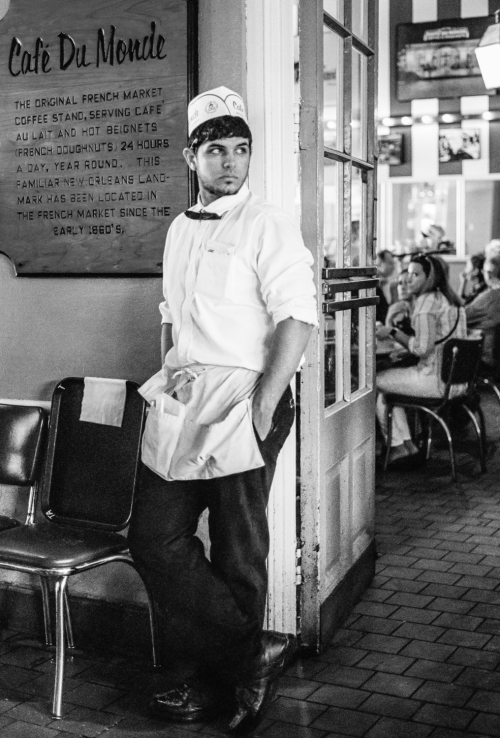 The last time I was in New Orleans was before Katrina—about two decades ago. I’m probably looking through Pat O’Brien’s rose-colored Hurricane glass when I say this, but New Orleans seemed a bit more authentic back then. Of course, it’s easy to romanticize the city after a few potent rum punch drinks. I spent some time talking to a long-time resident and store owner who was quick to point out that the locals left in droves after Katrina, paving the way for a more tourist-centric version of New Orleans to emerge from the receding floodwater. I resolved myself to the idea that I had to dig a little deeper and walk a little further to find true pockets of Americana to photograph. If the blisters on my feet were any indication, my trip was a resounding success.

Feeling like a more intoxicated, grimier version of Fremont Street in Vegas, Bourbon Street is considered by many to be the symbolic epicenter of the city—but don’t tell that to the locals. As I carefully navigated down the pothole-riddled street in search of decisive photographic moments, it was hard to avoid the putrid stench that wafted through the air like a heat-seeking missile. Finding your Zen is never easy when you’re being bombarded by a cacophony of sound and a potpourri of rancid smells emanating from every direction and doorway. Eventually, you become immune. Truth be told, I sort of have a love-hate thing going on with the French Quarter because it doesn’t pretend to be anything but what it is. Debauchery aside, there’s an intoxicatingly dark undercurrent and bon vivant to this part of the city that I find intriguing—oh, and the food!

With a colorful vibe reminiscent of a circus freak sideshow, the streets are filled with an eclectic mix of souls from all walks of life. There were the awkward, half-drunk convention attendees trying their hardest to be hip; the shirtless kids noisily banging on five-gallon, plastic paint pails; the intimidating 350-lb bar-bouncing gangstas working the doors; the boisterous frat boys catcalling from the balcony; and the relentless barkers holding up “3-for-1” drink signs. Night or day, you’ll find the homeless population lining the sidewalks like permanent street props, stoically blending into the background like vintage gas lamps. Sadly, it was hard to ignore all those lost souls who were hoping to land a buck or two to help pay for the next don’t ask. Many of the destitute people I encountered were warm and gracious, which only goes to show that even in light of their dim circumstances, their spirits still shone brightly. 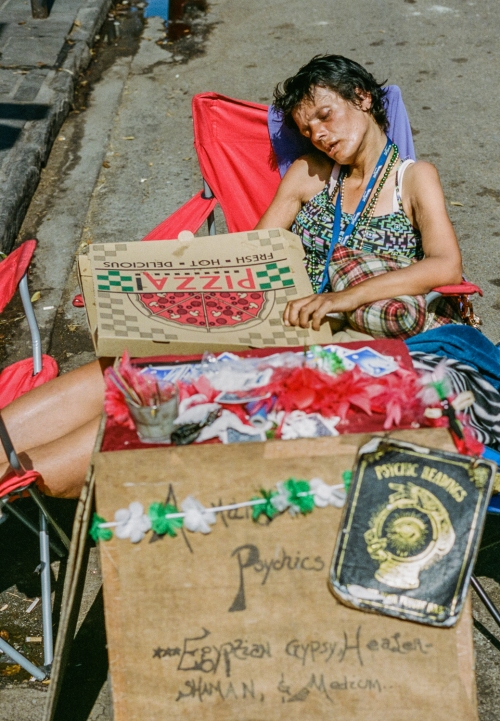 In all fairness, Bourbon Street is a very small part of the overall New Orleans experience—and I’d be doing the Crescent City a disservice if I didn’t talk about all the other amazing locations to check out—especially as you start pushing out from the Vieux Carré. Even a small stroll away from Bourbon onto Royal or Decatur Streets or around Jackson Square is enough to entirely change your perception of the place. Armed with an old-school 35mm film camera, I strolled the city like a wandering gypsy, hoping to document “how it felt” to be in New Orleans. Over the course of five days, I logged over thirty miles on foot and many more by way of streetcar. Although most of my time was spent trekking around the French Quarter, I visited other fascinating areas in the Garden District, Tremé, and on Frenchmen Street in Faubourg Marigny. If you’re looking for the true heartbeat of the city, you’re more likely to find it in these authentic neighborhoods. 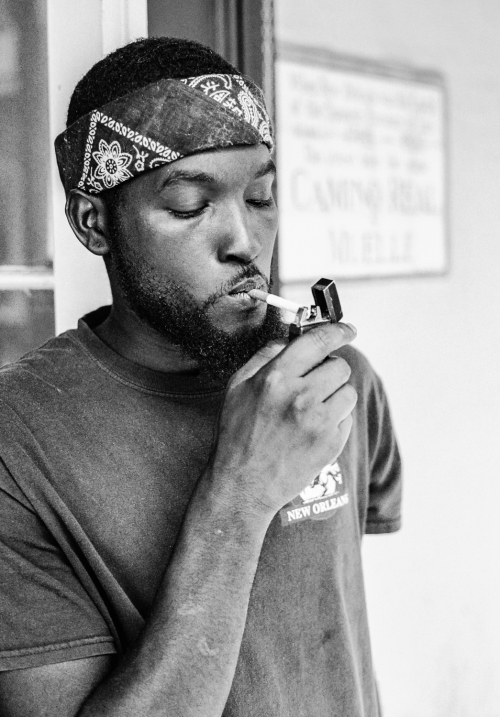 Standing on the corner of St. Peter, overcome by feelings of déjà vu, I watch a brass band howl out a few soulful jazz standards as the crowds start to gather. A poet-for-hire with an old-fashioned Corona sets up shop right behind them, tap-tap-dinging in tempo like Ginsberg. A blissful blend of fried po’ boy and sweet praline hangs thick in the air—smelling even better than the state fair. Charming my senses into submission like a Voodoo Queen enchantress, the city has once again left me spellbound and longing for more. Yes, Louis, I know what it means to miss New Orleans. You can stay away as long as you want, but the place will always be etched into your soul. 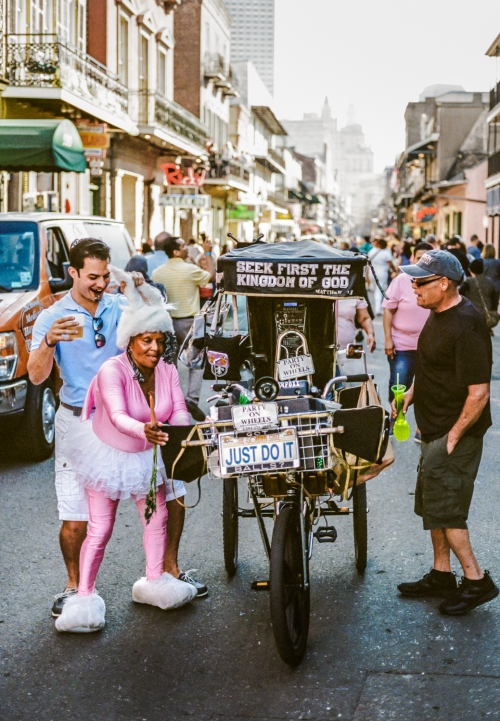 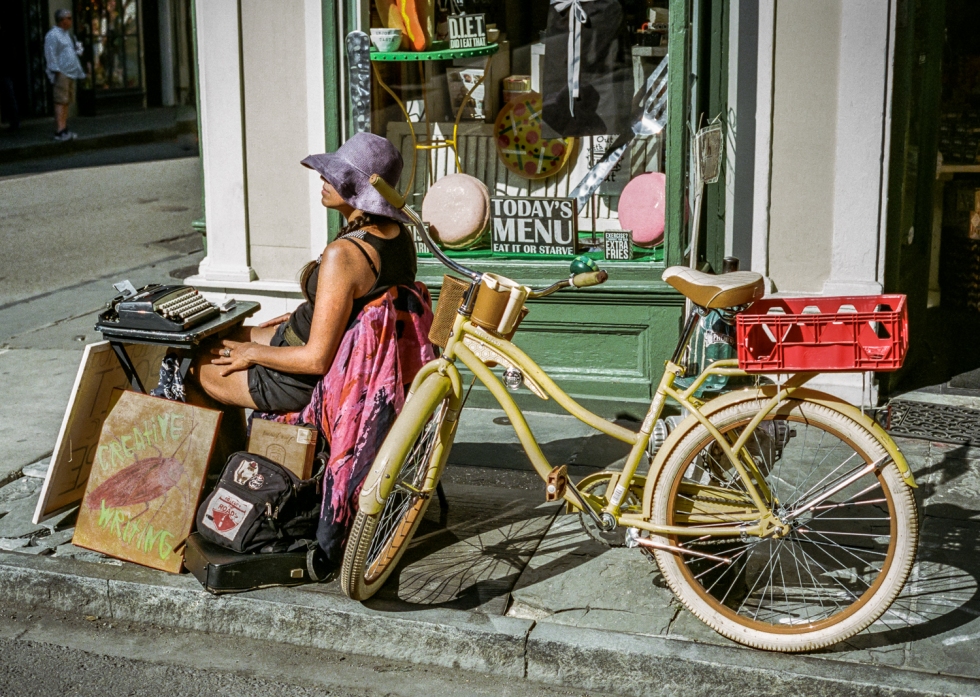 Without question, I found some parts of the city to be unsavory. But for those who are willing to look beyond the decadent and distasteful, you’ll find New Orleans to be a rich and flavorful jambalaya of sights, sounds, smells, and characters—a truly memorable destination for any artist hoping to find his or her flow in the city that care forgot.