Clutching my yellow waterproof Pelican case in one hand and my ice-cold tripod in the other, I slowly lumbered my way through the knee-deep snow, doing what I could to stay upright.  Imagine carrying a 100-pound barbell on an ice rink wearing only slippers, and you’ll get a sense for what I was experiencing.  I had frequented this river trail many times before during the summer and fall, and was intimately familiar with its challenging terrain.  Frew Mill along Slippery Rock Creek (in Western Pennsylvania) is treacherous even when you can see where you are walking.

I suppose they call it Slippery Rock for good reason.  Now add in over a foot of heavy snow blanketed on top of sharp uneven rocks, deep ditches and tangled roots, and you’d wonder why I chose to come out here in the first place.  After all, it was Super Bowl weekend and the “call of the couch” was stronger than the “call of the wild.”    But snowstorms like this don’t happen very often—and the thought of capturing some photographic winter wonderland magic was just too compelling to ignore. 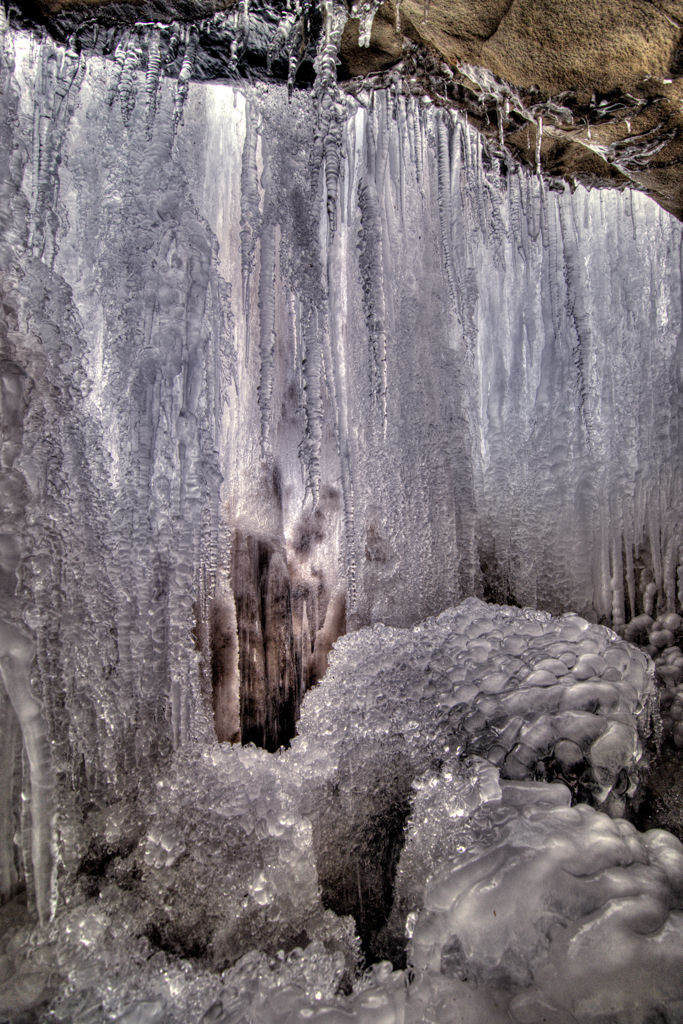 After about a quarter of a mile of vigorous slogging and many falls or near falls, I reached a point on the trail that was situated along a dangerous slope overlooking a rather steep drop off to the swirling semi-frozen river below.  Who was I fooling to think that I could actually traverse this spot given the perilously icy conditions?  Galen Rowell, I am not.  And to make matters worse, the fact that I was carrying heavy gear not only threw off my balance, but it also tied up my hands—preventing me from grabbing hold of anything for additional support.  Playing out like a scene from the ice climbing movie “Vertical Limit,” I soon found myself desperately grasping onto a root to save my life, as my body and gear slowly started drifting down the slope.

With one raw hand clinging onto the stray root and my right boot barely keeping my tripod and case from going over the drop-off, I somehow managed to get my gear and myself back onto even footing.  I was exhausted, wet, and my numb fingers burned like a cookie-sheet out of a hot stove.  But I was OK.   “That’s it” I said to myself.  “It’s just not worth killing myself over a picture or two.”  So I reluctantly headed back.   It’s hard to become one with nature when you’re constantly worried about ending up at the bottom of a frozen ravine.

Intent on getting one good picture out of my little winter adventure, I decided to visit the waterfall that I frequently photographed during warmer months.  It was on the way back anyhow, and I figured I had nothing to lose.  When I finally made it to the waterfall, I was surprised to find two local teenage boys just hanging around.  From where I was standing, it didn’t look like anything spectacular on the outside, just a large voluminous and mostly featureless white sheet of frozen ice.  Although the boys seemed to be fascinated with it.  One of the boys yelled over to me, “hey if you really want some neat pictures, check this out.”  They then proceeded to show me a small manhole-sized entrance on the side of the waterfall beneath a large rock overhang that led into a hidden inner cavern behind the frozen waterfall itself.  I thanked them for tipping me to this great location as they went on their merry way in search of more unique places to explore.

I carefully wormed myself and my gear through the narrow crevice, effortlessly gliding on my back along the frozen ice floor like a car mechanic’s creeper.  Once in the ice cave, I could not believe what I saw.  Looking like Superman’s Fortress of Solitude, the place was otherworldly and strikingly beautiful.  A sea of large ice stalagmites hung down from the roof of the cave, and very interesting naturally-occurring ice sculptures of varying shapes and sizes covered much of the floor.  Because the inside of the cave was somewhat warmer than the outside, a steady stream of water and mist was streaming into the cave from the ceiling, making it a constant challenge to keep my lens and camera dry.  I had to wipe the front of my lens multiple times to prevent those foggy water droplets from forming on the front lens element—which would affect the image.

Aside from the Martian-like interior, what really made this spot interesting was the unique “glowing” light cast through the translucent frozen walls from the outside, which illuminated the ice and cave interior.  As the outside light changed, so would the colors on the inside, providing me with a constantly changing kaleidoscope-like show of subtle tones and colors.

One of the biggest challenges digital photographers have is how to successfully deal with the wide range of shadows to highlights in any given scene (called dynamic range).  It’s no surprise that our eyes can see and adjust to a much wider range of light than our cameras can.  While I did manage to take a few photographs using only one exposure, many of my cave photos utilize a technique called HDR (or High Dynamic Range).  Basically, you take multiple shots (brackets) of the same picture at different exposure values (some really dark and some really light), then you combine/merge them into one photo which more closely represents the full range of light that our eyes and brain can see.

Aside from my cave photography, the experience of just being there in the moment was surreal and highly enjoyable–although I will tell you that frostbite on the fanny is no laughing matter (luckily, there was no irreversible damage in this department, although I don’t think I felt my backside for about 24 hours afterward, lol).  I guess this is what they mean when they say, “freezing your rear off?” 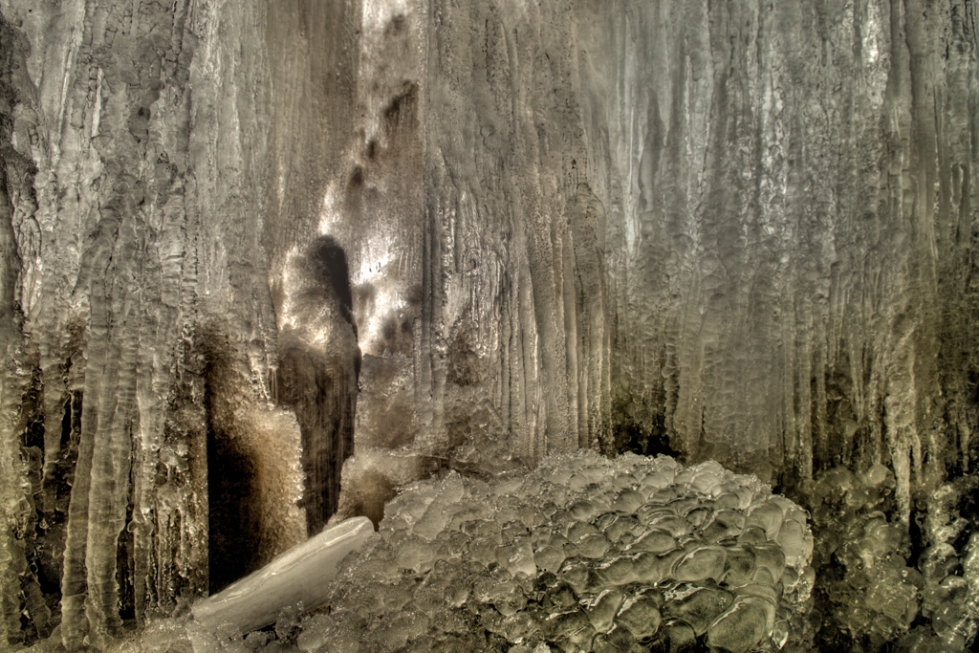 But seriously (no pun intended), famous commercial photographer Joe McNally tells us to “get our cameras in a different place,” which is certainly what I did when I took this series of images behind a frozen waterfall.  While my initial journey was somewhat harrowing, this trip did ultimately end up paying off in a big and unexpected way—which only underscores how important it is for photographers to never give up. More times than not, our best shots are not the ones that we originally set out to take, but the ones that happen when we open ourselves up to any and all possibilities.   While we can’t expect to find Superman’s Fortress of Solitude every time we go out to shoot, there is a wonderful and unique world just waiting to be discovered and explored by those of us who are willing and able to take the journey around the next trail bend.  The first step, is to just get off the couch.